Kapono's latest release is the critically acclaimed, "Slack Key Dreams of the Ponomoe"... A collection of new original songs recently nominated for the 2006 Grammy Award for Hawaiian Album of the Year, and winner of the 2006 Na Hoku Hanohano Awards for Engineering, and the very special "Ki-Ho'Alu Award" (Hawaiian Slack Key Award).

Kapono was the younger half of the popular group, "The Beamer Brothers," who defined the shape and direction of "Contemporary Hawaiian Music," and to this day have one of the biggest selling records in the history of the state of Hawai'i, the classic "Honolulu City Lights". Songs like "Mr. Sun Cho Lee", "Sweet Okole", "Only Good Times", "Seabreeze", and other works by the Beamer Brothers are forever embraced in the hearts and souls of those touched by the magic of Hawai'i. 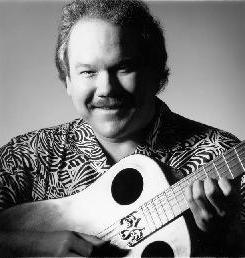 Kapono began playing music on an ukulele at the age of four years old when his mother taught him to play and dance a family song that she wrote with her grandmother, "Pupu Hinuhinu." Surrounded by uncles and aunties who sang Hawaiian songs and danced the Hula, Kapono's early influences were his family, especially his grandfather, Francis Keali'inohopono Beamer, son of beloved Hawaiian music composer, Helen Desha Beamer, and his mother, Hawaiiana authority and Hula master, Nona Beamer.

Kapono's new release is called, "Slack Key Dreams of the Ponomoe". It features his smooth vocal sound in a rich tapestry of acoustic and electric guitars, with jazz drummer, Noel Okimoto, and jazz bassist, Dean Taba. There are all new songs on the CD, all composed by Kapono; and there are two Hawaiian chants, rearranged with new harmonies and even the voice of Kapono's grandmother, Louise Leiomalama Walker Beamer. "I felt the presence of my grandmother very very strongly as I was writing and recording this new project", Kapono says. "She was guiding me along... It was amazing and wonderful". "It was like I was dreaming I was back on my grandfather's Hawaiian Homes ranch in Waimea on the Big Island. It was cool and quiet with only the sounds of the famous Waimea wind, Kipu'upu'u blowing across the pastures. I felt the ticking of my grandfather's clock... I was snuggled up in my kihepili (blanket) and I could hear the sound of my grandmother's sweet voice in the kitchen. Many of the songs reflect on those happy childhood days in Kamuela, with Pueo (Hawaiian owl), and horses and cattle, and my seventeen cousins to play with."

Kapono's recent CD called, "Pana Aloha, Hawaiian Heartbeat", has won the 2002 Hoku Award for "Instrumental Album of the Year". The Hawaiian heart fills the senses with love. Love for the land, love for special places, and most of all love for special people. With his new CD, "Pana Aloha, Hawaiian Heartbeat", Kapono Beamer captures the essence of the beating of loving hearts. These are songs that echo deep in the Hawaiian soul; always close at hand, pulsating in the back of the mind, and nestled in a loving heart. These songs are complete expressions of their Hawaiian composer's innermost images and feelings of aloha.

Kapono says, "I was inspired to create a collection of some of the most beloved Hawaiian melodies, the kind of songs it seems I always knew. Being surrounded by Hawaiian music ever since I can remember, I guess these melodies were planted in my heart at a very young age. Some of my earliest recollections are of my mother dancing the hula to the gentle sounds of an ukulele strumming. I remember the smiling faces of my grandfather, and uncles playing their guitars and singing, and the beauty of my grandmother and aunties as they danced the graceful hula. These songs have lived inside of me since those "small kid" days and I welcome the opportunity to present them, along with one added original song, in a simple setting of new musical arrangements featuring acoustic guitars.

Kapono's recent projects have found him in the recording studio with Keali'i Reichel, where he worked as co-producer on Keali'i's new hit CD, "Ke'alaokamaile". Kapono also was associate producer on Keali'is previous hit CD, "Mele Lana".

Kapono's projects have been released internationally in Europe and the Far East. His recording sessions in Munich Germany, Budapest Hungary, and Honolulu; have resulted in Kapono's fifth in a series of international instrumental record album projects, "Sunny Holiday." Recorded with the Budapest Symphony Orchestra, for Intersound Records in Europe, "Sunny Holiday" was released in 28 countries throughout the world.

Inspired by the beauty and spirit of Hawai'i and her people, Kapono remains open to new influences that spark the creative fires, producing new artists, and focusing on the composition and performance of new music featuring his unique acoustic guitar style.

With Dave Jenkins of "Pablo Cruise"

With The Beamer Brothers

"Slack Key Dreams of the Ponomoe"